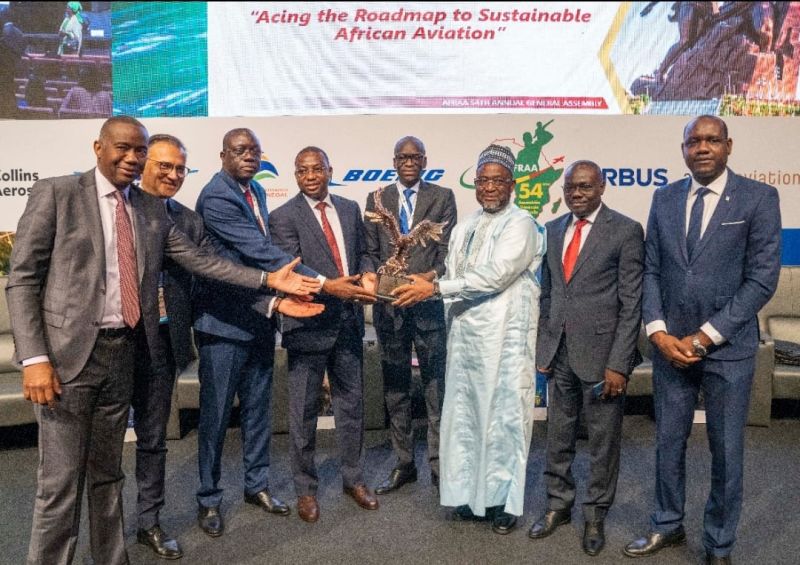 The African Airlines Association (AFRAA) and Air Senegal concluded the 54th Annual General Assembly (AGA) in Dakar, Senegal. The event was held under the High Patronage of the Government of Senegal. The Assembly, which brought together 456 delegates from 42 countries under the theme “Acing the Roadmap to Sustainable African Aviation”, called upon African airlines and air transport stakeholders to act on initiatives and strategies that will drive the sustainability of the air transport sector to realise its potential. Among others, these include: the Air Transport Sustainability Roadmap, the effective implementation of the Single African Air Transport Market (SAATM), the Continental Free Trade Agreement (AfCFTA), and the Free Movement Protocol.

In his welcome address, Mr. Alioune Badara Fall, President of AFRAA and CEO of Air Senegal stated: “I pay tribute to the extraordinary work by stakeholders in putting in place projects and programmes to build together a more united future for a sustainable African aviation, for the full benefit of African economies and populations.” The ultimate goal, he noted, will realise the improvement of connectivity between African countries, build truly efficient carriers both operationally and financially, attain structurally competitive tariffs in order to offer African populations the ability to travel, meet and exchange much more easily through new routes, increased frequencies.

Mr. Abdérahmane Berthé, AFRAA Secretary General, noted with satisfaction and great interest the importance given to the development of the aviation sector by the State of Senegal through investments in aeronautical development infrastructure and the National Company Air Senegal. “In memory of the particularly difficult times during this ongoing phase to restore air transport activity, I would like once again to express AFRAA’s solidarity with the entire chain of players in the aeronautical industry. As the aviation community, we must continue the ongoing joint efforts to support recovery and foster a sustainable and resilient air transport system in Africa.” he stated.

Among the resolutions, in line with the industry commitment towards achieving net zero emissions by 2050, the Assembly urged all industry stakeholders to commit to addressing the environmental impact of their policies, products, and activities with concrete actions and clear timelines. The Assembly further encouraged all AFRAA member airlines to continue improving their operations’ efficiency to achieve sustained in-sector emissions reductions and to support the transition to reliable, cost-competitive Sustainable Aviation Fuels (SAF).

Host of the 55th AGA

Launch of the 1st edition of the History of Aviation report

AFRAA launched the 1st edition of the History of African Aviation Report at the side-lines of the 54th AFRAA Annual General Assembly (AGA) & Summit on December 12, 2022 in Dakar – Senegal. The History of Aviation Report by AFRAA is a prestigious industry publication, a first of its kind in Africa, which contains a rich mix of information to enrich the understanding of the development of African aviation.

Highlights from the Secretary General’s State of the Industry report

The recovery of aviation activity continued in 2022. After a contraction in 2020, Africa’s GDP rebounded by 6.9% in 2021. The prospects for economic growth in Africa are highly uncertain. The effects of the Russian-Ukrainian conflict could lead to a larger decline in global production than currently expected.

Compared to February 2020, African airlines have reopened almost all international routes. Some have extended their network to new destinations, particularly in West and North Africa. From January to November 2022, offered capacity reached 75.4% for the same period in 2019, while traffic reached 74.7%. The recovery of the level of activity in 2019 is still in progress.

“Our industry must build its resilience and sustainability in the face of future crises like Covid 19 and stop the progressive marginalization we have suffered over the past 40 years.” Mr. Berthé emphasized.